Rotherhithe comes from the Anglo Saxon – Rederheia “Landing Place for cattle” and will be the final destination on our walk which starts at Tower Bridge.

At he end of the 19th Century it was the biggest warehouse complex in London.
Tea coffee spices and dried fruit would be wheeled along the iron gangways and it was known as “The lader of London”. It is also where John Cleese hung out of a window in A Fish Called Wanda.
Dr Who and Oliver! were also filmed here.

In the 18th century docks were so busy that cargoes remained on ships for weeks attracting pirates and if they got caught they would be hanged at this dock
The river at this inlet was called Neckinger after devil’s Neckerchief which was cockney for the noose used for hanging pirates.
This is also where Bill Sykes falls to his death at Jacbs Island in Oliver Twist and Fagin lives with his pickpockets.

Cherry Garden Pier is where boats sounded their horns for Tower Bridge to open.
Samuel Pepys bought cherries for his wife here too and The Fighting Temeraire by Turner was painted from here of a barge being taken to the breakers yard which is discussed by James Bond and Q in Skyfall.

The Angel Pub was built by monks of Bermondsey Abbey and has
trap Doors and piles over the river useful for smugglers.
Captain Cook and Pepys drank here and Judge Jeffrys watched executions at execution dock from here.
See all about Judge Jeffrys in my Wapping video “Riverside Walk London.” 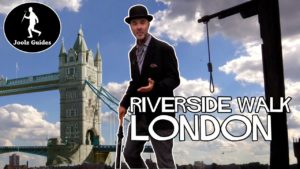 Christopher Jones – Mayflower Captain is buried here (unmarked grave)
The Mayflower was the ship that carried Pilgrim Fathers to the New World from here in 1620.

Mayflower rotted beside the Pub and it used to be called the Ship Tavern.

It is also the only pub licenced to sell both English and American stamps.

Brunel Engine House housed the machine which pumped out the water from the first underwater thoroughfare in the world. Now a museum tells story of the tunnel.

In 1843 it was constructed by Marc Brunel who showed everyone how to do it after seeing a worm in debtor’s prison – he invented a special shield for digging.

He is buried in Kensal Green and his technique is still used today.

The Thames Tunnel was supposed to take traffic but there wasn’t the money to pay for the proper entrances so it was a foot tunnel.
Like everywhere it became popular with thieves and it was sold to the railway.

You can still see the original arches in Rotherhithe Tube station.

If you enjoyed this London Riverside walk take a look at some of my other films! Contact me for a private walk.