For a lovely walk around Borough Market and London Bridge, ending at the Tower of London we started at The George Inn, Southwark. Take a drink in this beautiful historic pub which Shakespeare and Dickens knew. It is the last galleried inn left in London and used to have galleries on 3 sides enabling customers to watch plays in the courtyard below. 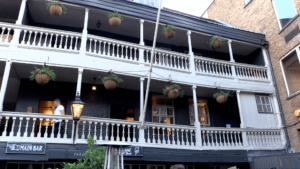 Then pass by Borough Market which I made a separate video about, the oldest fruit and veg market in London and head up to London Bridge.

The Romans built the first bridge in AD 52, then they left and it all rotted away until another was built 800 years later.
And by the 11th century London was ruled by the viking called Sweyn Forkbeard, son of Harald Bluetooth. I love the names they had…

And he had seized London from Ethelred the unready. But Ethelred wanted it back wanted it back, so with the help of King Olaf of Norway they sailed up the thames and pulled the supports away giving rise to the the song London Bridge is Falling down. 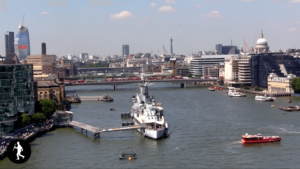 Then Henry ii built the the most iconic one in 1176 which lasted ages and had shops and houses on it like the Ponte Vechhio in Florence, and if you were a traitor like William Wallace or Guy Fawkes you’d have your head displayed on a spike here. How would you like that? Stopped you doing it again I suppose.

In those days the river was quite shallow and used to freeze over in the winter and they’d have these beautiful frost fairs. You could ice skate across it!

And then it got so congested and chaotic here in the 1700s that the mayor asked everyone to drive on the left and that’s been the law in Britain ever since.

It the 1960s an America bought the old bridge because it needed rebuilding and he transported it to Arizona where you can now walk across the old bridge!

Near where the Roman London Bridge came ashore is the monument. It commemorates the fire of London and is the same height as distance from Pudding Lane baker shop where fire started in 1666 destroying 4 fifths of London including St Pauls.

We also pass by St Magnus the Martyr, Old Billingsgate, St Olaves and London’s oldest church, All Hallows By The Tower.

Billingsgate is no longer a market but used for special events. In 1275 Edward I imposed duties on wool and leather and they built the customs house next door which was where modern customs and excise started. Chaucer worked as a customs officer there.

Then down Seething Lane is St Olaves.
Pepys lived in Seething Lane next door to Admiral William Penn. He called this “our own church” and built a gallery leading from his office to the church so he wouldn’t get wet. He worked for the Navy Office.
This is where he lived when he wrote his diaries. His wife died aged 29 and he erected a bust to her in the north wall so he could see it from his pew. (Although he was pretty unfaithful to her) When he died he was buried here next to her. 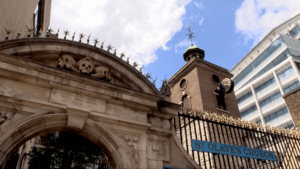 ST Olaf was Norwegian King Olaf who helped Ethelred the Unready to pull down London Bridge in 1014. A church was built in his honour on this location but this has been rebuilt since.

1665 – many plague victims were buried here including Mary Ramsay who they say Brought the plague to London and also Mother Goose who was a real character.

As a reference to the plague there are skulls above entrance to churchyard and Dickens called it St Ghastly Grim in one of his books. The Commercial Traveller.

All Hallows By The Tower

Our last stop is All Hallows by the Tower. London’s oldest church.
Established in 675 AD.

Southwest corner there’s a 7th Century Saxon arch and is the oldest bit of church material in London. 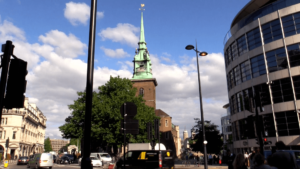 At the entrance to the undercroft there’s a 2nd century Roman paving and the stones of the altar at the end were brought back from the Templar Chuch of Athlit in Israel in the crusades.

St Thomas More’s body brought here after executed for refusing to sign Henry’s Act of Supremacy and
William Penn (Founder of Pennsylvania) was baptised here.
His father Admiral Penn saved the church from the Fire of London by ordering his men from the nearby naval yard to blow up surrounding houses.

Samuel Pepys famously climbed up the steeple and records that he witnessed the saddest sight of desolation before being too frightened to stay there long.