Highgate village and through highgate cemetery is one of my favourite walks including ghost stories, train robbers and other quirky stories.
Starting at Swains Lane called thus because of Pig herders from the 1300s driving swine down to Smithfields.
Sightings of a tall man in a hat (who wasn’t me)who would jump out and scare people and then disappear into a wall were common in Swains Lane which is also a cycling mecca because of one of the steepest gradients in London.
The Beatles also had a famous photo taken here during their “Mad Day Out”. 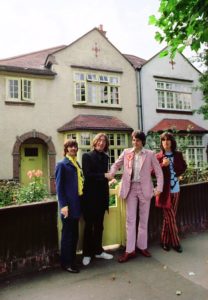 Highgate Cemetery – opened in 1839 (one of 7 cemeteries Parliament decided on) is the final resting place of Michal Faraday, Karl Marx, George Michael and Malcolm McLaren.
In the 1960s reports of blood drained animals and spectral sightings led to claims of a Highgate vampire.

After walking through Waterlow park you can either walk down to Archway where you can see the Dick Whittington Stone (see my film about this) or walk up to Highgate Village which is what we do in this walk.

Pond Square also has ghost stories, but one about a chicken! It is also where Sir Francis Bacon died and where many famous people lived like George Michael, Kate Moss, Terry Gilliam and Ray Davies all very nearby.

The Flask pub is a lovely inn. Hampstead was popular for its wells and you could buy flasks here back in the old days.
Dick Turpin, the highwayman, hid here when fleeing from the law and Hogarth drank here. So did Byron, Shelley, Keats and Coleridge who lived over the road. There is also a ghost of a Spanish Barmaid which haunts The Flask. 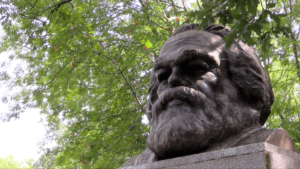 Other pubs include The Prince of Wales, Highgate Village, which has the hardest pub quiz in London!

Highgate School was founded in 1565 and in the chapel churchyard is buried Peter Heyward, one of the Bounty Mutineers, about which I have an award winning film Take Me To Pitcairn available on youtube.

The Gatehouse pub dates back to the 14th Century.
The Bishop of London owned the park and the name Highgate comes from the gates which provided access to the park that stretched down to The Spaniards Inn. The gate house was the toll gate and is the earliest recorded building in Highgate. There’s a boundary marker here too. 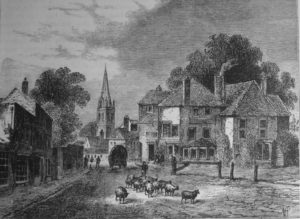 The Wrestlers is the oldest pub in Highgate still doing business.
Drunk people came to settle differences and fight. They liked high points for some reason, perhaps because places like Highgate had so many pubs. 16 pubs in total in Highgate which started up because they were on the sheep herders trail to London and people would stop to take a rest at the highest point. Maybe for the view!
The Wrestlers still have the Swearing on horns ceremony which even Lord Byron was famous for doing.

You would then become a freeman of Highgate. 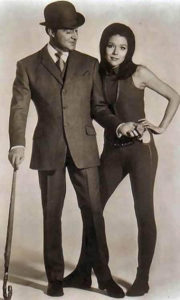 Just opposite The Wrestlers is Highpoint which features in many TV productions like Poirot because of its art deco appearance. It was also where Emma Peel lived in The Avengers tv series in the 1960s. My dad was in The Avengers as a regular and used to choreograph the fight scenes! 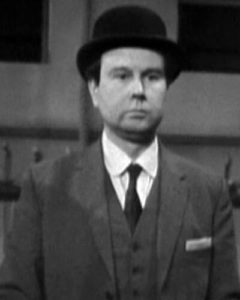 Thanks to Tom Adeney and Laura Willis