Did you know that the head of King James iv of Scotland is buried under a building in the city of London?

The Battle of Flodden Field in 1513, which is in Northumberland, was one of the bloodiest ever between Scotland and England and according to the great London chronicler and historian, John Stow, his body was brought to a monastery in Surrey in a lead box. When it was there, some of the workmen thought it would be a hilarious jape to cut off his head and the master glazier, Launcelot Young, decided to take it with him to his house in Wood Street because it still had its red beard and hair and looked rather amusing. 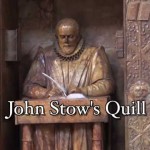 Eventually it started to decay and he decided to have it buried with the other bones at St Michaels church in Gresham Street (at the corner of Wood Street). This church was burned down in the fire of London and then rebuilt by Christopher Wren but then bombed by the Germans and eventually pulled down, leaving behind the head of poor old King James iv of Scotland!

Also in Wood Street is another old church. ST Albans was a medieval church which stood at the corner of Love Lan and Wood Street. This is also where the south gate of the ancient Roman fort stood. A road ran through the fort north to Cripplegate.

St Albans was also damaged in the fire of London and world war ii but this tower is all that remains of Christopher Wren’s rebuilt church.

Further up Wood Street on the corner of Cheapside is a Tree which features in William Wordsworth’s famous poem. The houses around it are not allowed to be built any taller because the tree is protected and retains a right to light.