Hampstead is a perfect place to see how people lived in years gone by. Very little has changed over the last 300 years except for the cars. The Hampstead history is as fascinating as the streets are beautiful and quaint. One could almost be in an Agatha Christie novel!

Just past Well Walk as you ascend East Heath Road is Boy George’s House. A beautiful gothic building which he bought after the success of his Culture Club hit Do You Really Want To Hurt Me. He’s lived there since the 1980s and was in the news more recently when a man had been kept there against his will. Boy George was in trouble with the police more than

once and even made to do community service after the discovery of drugs in his New York apartment.

In 2010 George Michael was arrested for crashing his range rover into the Snappy Snaps on Hampstead High Street so this is a place very dear to all noth Londoners’ hearts and a great piece of Hampstead history. Apparently he had been attending gay pride that Sunday afternoon and was still in a state of revelry!

In the 1700s Admiral Mathew Barton bought this house in Hampstead after a decent naval career. Legend has it that he would fire cannons from his roof on the the king’s birthday as well as raising a flag up the flag pole which would enrage his neighbours. The house has been built with quarterdecks and misenmasts to replicate a ship. It is little wonder that it was the inspiration for P.L.Travers’ character Admiral Boom in Mary Poppins.

The cemetery of ST John at Hampstead is full of famous people. Not least John Constable who lived in Hampstead and 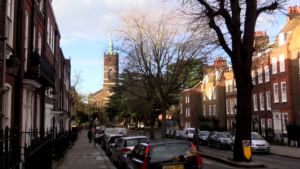 never tired of painting it. The Llewelyn Davis brothers are also here in the family tomb. J.M. Barrie used to play with them in Kensington gardens when they were young and based his character Peter Pan on one of them. It Bram Stoker’s Dracula Lucy is also described as being entombed here.

If you want to know how houses looked in King George iii‘s time then Church Row is a great example. Men and women would parade here after having taken the waters in Hampstead.

Erno Goldfinger was an architect famous for his brutalist architecture and lived at 2 Willow Road for 50 years. It is now preserved as a museum and you can see exactly how he lived. He didn’t get on with his neighbour, Ian Fleming, resulting in Fleming naming one of his greatest villains after him.

If you enjoyed this video take a look at some of my other films!  or  Contact me for a private walk.