Funny English idioms and why we use them. English people love to use phrases and idioms which are all based on events from our history. Here are some common idioms which English people use every day but you probably never stopped to ask why they use them or where they are from. Even most English people don’t know themselves!

To Spend a Penny

English people are fascinated with going to the toilet. Our whole sense of humour seems to revolve around the operation of our digestive system or the manner in which we relieve ourselves. Because it’s considered improper to talk about such things in polite society English people sought an alternative way to express the need to visit the toilet.
The first public flushing toilets appeared in Crystal Palace during the Great Exhibition of 1851 and were invented by George Jennings. After the exhibition finished they decided to open up some street level public lavatories in Fleet Street. The cost of using these toilets was one penny. Hence the English idiom came about. 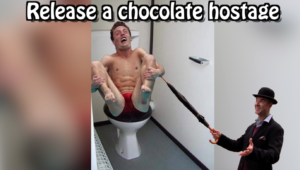 So instead of excuse oneself from the dinner table by saying “I need the toilet” we would simply state, “I’m going to spend a penny“!

Why we say “To Hear A Pin Drop”

When the first tea rooms opened up in England in the 1700s buyers would attend the tea auctions and the would only be a certain amount of time available to place your bid. In order to set a time limit a pin would be stuck into a candle and then the candle would be allowed to burn down. Buyers could place bids until the level of the candle reached as far down as the pin, at which stage the pin would fall out. If there were no more bids at this stage the room would be silent and you would be able to hear a pin drop. Hence this English idiom was born!

Why we say “Being Sent To Coventry”

In 1266 a law was brought in by King Henry iii called The Assize of Bread and Ale. This meant that anyone selling bread by the weight must not fall short of the stated weight or they could be penalised by being flogged or put in the pillory. 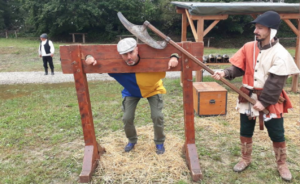 In order to ensue that when they sold a certain weight of bread (which was usually around 12 loaves worth) that they wouldn’t fall short of that weight the bakers would throw in an extra loaf just to be on the safe side!

Why we say “Being on the wagon”

When a convict was due to be hanged they would be taken by cart to the gallows. Typically they would stop off at a pub en route and be bought one final pint of beer as an act of mercy by the church. They would then have to get back onto the cart and their feet wouldn’t touch the ground again until they had been hanged. So, after their pint of beer if someone offered them another one they would have to say “Sorry I’m on the wagon” meaning he couldn’t drink another because he has to get on the wagon to go and be hanged!

If you enjoyed this video take a look at some of my other films!  or  Contact me for a private walk.