I had never heard of Aleister Crowley before I went to Sicily but whilst I was doing some research into the area I found out about this peculiar man who lived in Cefalu.

Aleister Crowley was born in 1875 in Royal Leamington Spa and wrote many books and pamphlets throughout his life after being educated at Cambridge and developing an interest in Western Esotericism. He founded a religion called Thelema. He would take drugs and conduct sex experiments at his house in Cefalu, Sicily and in his life time was a mountaineer, poet, painter novelist and ceremonial magician. 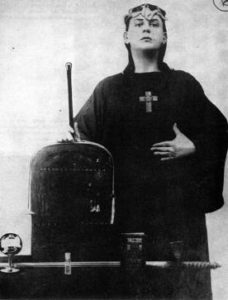 He led a colourful and extremely varied life and was even said by some to have been recruited by the British Intelligence services during the war.

The house is still here and is in a sorry state of repair. Completely abandoned, with a caved-in roof, it looks more like a squat. There are no entry signs all around it and I had to climb over a fence and down a brambly slope to get to it whilst a nearby do provided the sound track with incessant barking. The feeling was definitely unwelcoming and I knew I shouldn’t be there.

Aleister Crowley carried out all sorts of depraved sex magic here and entertained friends, followers and his students here. He would even take drugs and have sex in front of the children of his students causing him to be dubbed The Wickedest Man in the World by the English press.

Another thing I didn’t know was that he was so notorious that he appeared on the cover of the Sergent Pepper album and he also inspired David Bowie and Aldous Huxley, as well as being friends with L. Ron Hubbard. 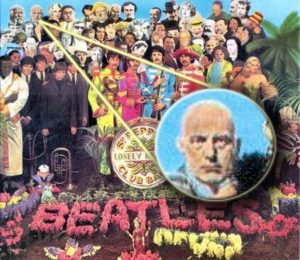 He claimed to be the beast 666 as prophecised by John the divine in the book of revelation and believed himself to be the prophet that would lead mankind into the aeon of Horus in the 20th century.

Eventually Mussolini had enough of him and had him expelled from Italy and he eventually died in 1947.

The house itself retains its creepy aura and there is definitely a freaky sensation one gets, not least because it feels like some of his strange followers or drug addicts might show up. It’s very unsafe and cryptic mottos and slogans have been scrawled on the walls and paintings remain which might or might not be by him. Aleister Crowley’s spirit hangs indelibly over these ruins.

I was happy when I left!

Thanks to Roberta De Francia for the music!

If you want to see more of my videos about Sicily don’t forget to subscribe to my youtube channel!